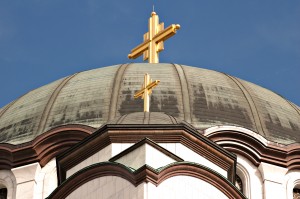 Serbs are mostly Orthodox Christians, very religious and adhere to their traditions. After the fall of communism, the people started to turn back to their religious roots looking to restore their tradition, spirituality and culture.
Note: the church is entered in a peaceful manner, conservative dress is requested (for men, long pants; for women, covered shoulders and knees).

The idea of building a monumental Orthodox church in Belgrade dates from the late 19th century. In 1926, after several competitions, the architectural design of Bogdan Nestorović was accepted. Construction was interrupted in 1941 due to beginning of the World War II. Years later, as a result of the bombing and neglect of the government at the time, continuing construction was under question.

Finally, in 1985, Patriarch German claimed the Charter of the further continuation of works at the Temple. For Archpriest, was appointed Professor Branko Pesic. In addition to the magnificent temple, there is a small Church of Saint Sava, originally built in the 18th century (at the place where four centuries before, the relics of St. Sava were burned). The church has repeatedly been burned and destroyed over the years, but was rebuilt each time.
St. Sava is the largest Orthodox structure in the Balkans and one of the biggest Orthodox churches in the world.

Built 1931-1940 and llocated at Tasmajdan, one of the most beautiful city parks. Today’s church was built on the site of the old church from 1835 in Serbian-Byzantine style. In the southern part there is a sarcophagus with the relics of Emperor Dusan, and on the north, the tomb where the remains of Patriarch German are.

The church has one of the richest collections of Serbian icons from the 18th and 19 century.

Sv.Petka and Church of the Virgin Mother

Built in 1867, is located on Kalemegdan in the immediate vicinity of the church Ružica. The present chapel was built in 1937. Unusual location and a nice ambience of Kalemegdan Park give this church special charm and beauty.

In place of the old church from 19th century, the new larger church was built in 1929. Plans for the construction were made by Jelisaveta Načić. Present wall compositions were painted in th al  secco technique by monk Naum Andric in period 1970-72.

Church of St. Michael Archangel is situated in the old town center across from the Serbian Patriarchate. Built in 1837-1840 on the request of Mihailo Obrenovic and today is one of the most important shrines of the Serbian people. The main architect was Adam Friedrich Kwerfeld. The interior of the church is richly decorated. Gilded iconostasis were made by the sculptor Dimitrije Petrović while the icons on the iconostasis, throne, and pulpit were made by Dimitrije Avramovic, one of the foremost painters of Serbia in 19th century. The church also contains relics of the king Uros and despot Stefan as well as tombs of church leaders and Serbian rulers of the Obrenovic dynasty. Infront of the main portal two great men of Serbian culture are buried: Vuk Karadzic and Dositej Obradovic.
The building of the today’s Patriarchate was built between 1934 and 1935 by the architect Viktor Lukomski. The building also houses a library and museum of the Serbian Orthodox Church.

Rakovica Monastery is located near the center of Belgrade. (11 km away), on the road leading to the Avala mountain. Monastery with its church dedicated to St. Archangel Michael and Gabriel was built during the reign of Prince Lazar. By the decision of Patriarch German in 1959. monastery was turned into a nunnery.

Today, this church is known as the place where the 44th Patriarch of Orthodox Church, Pavle, is buried.

Bajrakli mosque was built in the 16th century and is the main city mosque. It is in Gospodar Jevremova St, 11, at the Dorcol. In the mosque there is the madrasah, religious secondary school. According to the latest census of  2002, more than twenty thousand Muslims live in Belgrade.

Belgrade Synagogue was opened in the summer of 1926 and is located in downtown. Society of Belgrade Ashkenazi Jews bought the land for the construction of the synagogue from City Hall. It had originally honored Ashkenazi rituals of Belgrade Jews congregations who spoke Yiddish. Today, mostly members of the small community of Sephardic Jews who survived the Holocaust and remained living in Belgrade gather here.

Services are regular on Friday night, Saturday morning, and on Jewish holidays. In Belgrade, there is another synagogue in Zemun, but is not active.

Even in Roman times, Belgrade was diocese. Kingdom of Serbia and the Apostolic See signed Concordat in 1914 for establishing the Archdiocese of Belgrade. In addition to diocesan priests, monks and nuns also serve here (Jesuits, Franciscans, and Salesians land lazarists). The diocese issued a religious magazine “Blagovest” which is published four times a year. In Belgrade there are also other catholic churches:

Church of Christ the King, St. Anthony, St. Cyril and Methodius, St. Joseph the Worker, St. Peter and the Assumption of Mary. In Zemun, there are two churches: St. John of Capistrano and the Assumption of the Blessed Virgin Mary. Services are held regularly, every day, Sundays and public holidays.