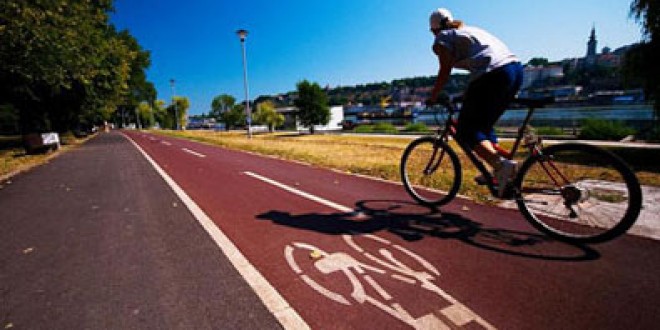 Belgrade has more than 65.5 kilometers of bike trails. The two longest stretch along the Sava and the Zemun quay and connect to the Branko’s Bridge, where the elevator can take you from one route to the other. Points for renting are located at two sites in Ada Ciganlija, in SC “Milan Gale Muškatirović” and in the Zemun and the Sava quay.

iBikeBelgrade is a bicycle tour that provides an opportunity to get to know Belgrade in quite a special way. The tour starts from the city center, with a guide, goes along the Danube and the Sava River in Novi Beograd, then through New Belgrade and Ada Ciganlija. The tour is 30 km long, during which you can find out more about the sights of Belgrade. The price is 1500 RSD. The duration is 4 hours, including breaks.
http://www.ibikebelgrade.com/bicycle-tours-in-belgrade-serbia/
+381 66 900 8386

Route B: Hotel “Jugoslavija” – banks of Danube and Sava – Bloc 45

These two routes join at Branko’s Bridge, where a cycling elevator can be found.

Route C: around the lake of Ada Ciganlija, 8 km

Bicycles can be rented at several places along these routes.