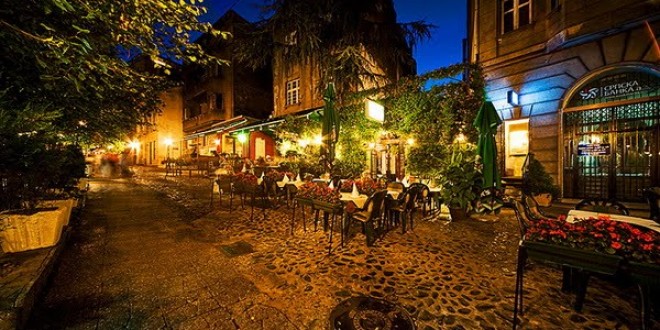 Skadarlija as it Once Was

This ambiental nook of Belgrade, still standing to this day, is preserved in the area of Skadarska Street around the bohemian Tri šešira inn. These were small houses, but a few of which remain. The house where the Tri šešira inn stands today is typical, built in the second half of the 19th century, the abode of former bohemians. The aqueduct of the Bulbulder waterway with 14 arches once stood in the middle of the mahala, in front of the subsequently built house of Đura Jakšić, as the sole reminder of times gone by. During the 19th century this used to be the Skadar Gate with the Skadar Drinking-Fountain.

A stream once ran down the center of the street, quite treacherous in heavy rain. The 19th century Belgrade press noted a curious event: “In Skadarska Street, as heading towards Mala pivara, the water level got so high during last night’s rain, that considerable damage was wrought for some. One woman nearly paid with her life. Marija, wife to Nikola Jovanović the glassblower, went out into the street just as the flood hit hard. At that exact moment, the water caught her in its turbulent wake and carried her all the way to the stream below Mala pivara, from whence the neighbors extricated her with great difficulties.”

In the second half of the 19th century, the Gipsy settlements slowly vanished and the former sheds were replaced by more sturdy houses accommodating artisans, caterers and petty clerks. Houses were built spontaneously, under a strong Eastern influence, and yards were linked with gates through which one could always run over to the neighbor’s. There was a habit of planting oleanders in wooden barrels along the street. They formed a sort of fence creating comfortable shade for the residents of Skadarlija in front of their houses, at the same time endowing the street with a unique atmosphere.

In mid 19th century, the construction of the future industrial complex was launched among Skadarlija’s small houses, first known as Mala pivara (Small Brewery), later as Bajlonijeva pivara. Most likely in the course of the second half of the 19th century, the following inns were opened: Bums keler, Vuk Karadžić, Zlatni bokal, Miloš Obilić and Bandist, and the loudest of all -Tri šešira and Dva jelena.

The proximity of the National Theatre and the former operatic and vaudevillian hall of today’s Balkan Cinema made this area popular and attractive. Following the demolition of the Dardaneli Inn in 1901 – which lay in the location of today’s National Museum – actors, writers, poets and ordinary folk moved to the Skadarlija inns.

The period following World War I suffused the atmosphere of Skadarlija inns with jazz, dancing and champagne. In the 1930s, the demolition of several ground-level houses and the subsequent construction of multi-storey buildings blemished the former look of this street.

Bringing the Old Sheen Back to Skadarlija

The adaptation of Skadarlija began in 1966, based on projects by the architect Uglješa Bogunović. In an attempt to retain this part of old Belgrade, a reconstruction and revitalization of Skadarska Street was performed. The goal was to bring back the features this specific ambient once had, to revive tradition and add contemporary new sights. Traffic was eliminated from Skadarlija, a fountain was erected, the old cobbles, lanterns and candelabra were brought back, the Tri šešira, Dva jelena and Skadarlija inns were added to, while the interiors of the Ima dana, Zlatan bokal and Dva bela goluba were remodeled. The fortune-teller Ljubica reminded of the olden times, entertaining tourists with her predictions, along with the old drummer Šole and painters transferring motifs from Skadarlija onto canvas.

During the seventies Skadarlija became a “sister” to the Parisian Montmartre quarter. A procession of French painters and musicians paraded down our famous street when the charter on cooperation was signed. The following year, our artists returned the visit.