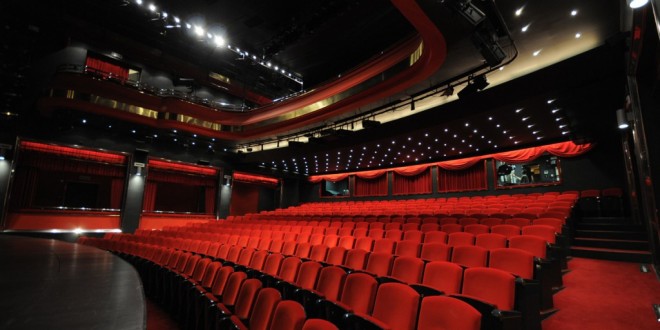 THE HISTORY OF TERAZIJE THEATRE

The history of Terazije Theatre, the only musical theatre in region, starts in 1949. It has changed its name for several times during more than half of the century of its existence: established as Humorous Theatre it already changed its name and up to 1959 it was called Belgrade Comedy. Uniting with Belgrade Drama Theatre in the fall of 1959. it becomes Contemporary Theatre having plays performing on both Stage Crveni Krst and Stage Terazije.

However, with the new season 1975-76 it regains its independency and adopts the name “Terazije Theatre” that it carries today. Due to thorough reconstruction of its head building in Terazije, from 1991 until its return to the original building (2005.), the plays were staged at “Theatre T” at 77a, Boulevard of King Alexander.

Theatre on Terazije has been for more than five decades enriching its drama, orchestra, ballet and choir ensembles with new, young talented schooled artists. It has always given a dynamic note of artistic freshness that was appealing to the audience. At the beginning positioned as mostly popular and easy-comedy genre theatre, with each season it developed not only repertoire ambitiousness but it gained more praise from the cultural public as a theatrical institution of high potential and relevant artistic achievements. Some of many shows preformed on this stage are: “Man of La Mancha”,” Hello, Doly”, ”Oklahoma!”, “Fiddler on the roof”, “Grease”, “West side story”, “Some like it hot”, “A Chorus Line”, “Kiss me Kate”, “Chicago”, “ Cabaret”, modern ballet shows “La Capinera” and “The Earth” etc.

Get direction to Terazije Theatre