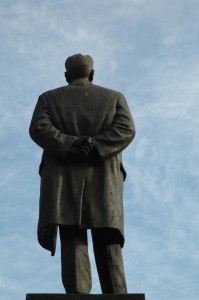 Beograd in Serbian language means ”white city” (”BEO”(white),”GRAD'(City). Belgrade is an ancient city whose history spans over 7000 years. Belgrade is the capital of Serbia and during the last century was also the capital of all the countries that have emerged in this region: the Kingdom of Serbs Croats and Slovenes; Socialist Federal Republic of Yugoslavia; the Federal Republic of Yugoslavia; the Union of Serbia and Montenegro; and currently called the Capital of the Republic of Serbia

Belgrade is located in Southeastern Europe on the Balkan Peninsula. It is also known as ”Gate of Balkans” and ‘’Doors of Central Europe’’, for it lies at the crossroads of Eastern and Western Europe.

(coordinates of Belgrade are marked in the city center, in the central city street Knez Mihailova)

Serbs make up 90% of the population of Belgrade. The rest of the population are members of different national and ethnic minorities such as the Montenegrins, Macedonians, Croats, Muslims (by nationality), Roms, as well a growing number of foreigners. Serbia is predominantly Orthodox Christian, however, there are other religious communities to be found. Specifically, in Belgrade there are Muslims (about 20,000), Roman Catholics (about 16,000), Protestants (about 4000). In Belgrade, until the Nazi occupation in World War II there was also a significant community of Jews.

The official language of Serbia is Serbian (member of the group of Slavic languages), and the Cyrillic is the official alphabet. In addition to the Cyrillic alphabet, there is a second equally used alphabet, Latinica. Both alphabets are taught in schools.

Most young people speak English and will gladly help you find your way in the streets of Belgrade.

Belgrade is located in the Central European time zone GMT +1. In observation of daylight savings time Belgrade switches to GMT +2 starting the last week of March until the last Sunday in October.

Belgrade’s climate is temperate continental, which means the city knows all four seasons. During winter and autumn a strong southeast wind, “Kosava’’, blows for three to seven days. This time can be a real ‘’air purifier’’ for the city and is one of the landmarks of Belgrade.

Summers in Belgrade are very warm, with temperatures in July and August being the most severe often exceeding +30 C. Winters can be very cold with lots of snow and average temperatures of -5 C to +2 C. However, whenever you decide to visit Belgrade, be sure you’ll enjoy-whether it is hot summer or beautiful white winter.

The official currency is the Serbian Dinar (RSD label) and consists of 100 pairs. The Euro is accepted as currency as well at many places. There are many currency exchange offices and Serbian banks where you can change your money for Dinars. Also, the ATM network allows you to withdraw money in Dinars. Credit Cards are widely accepted at shops and restaurants.

Prevailing market rate for the day

In Belgrade, a large number of institutions and stores are opened on Saturdays; and on Sundays shopping centers, some small shops and kiosks, as well as stores on the main street, Knez Mihailova, are open.

Kiosk- is a small shop that usually is open 24/7 offering an assortment of small items like, cigarettes, soft drinks, chocolate, alcoholic drinks, newspapers and magazines. Many newspaper stands as well as fast food stores in Belgrade are open for business every day.

• Easter Sunday (date is variable) – non-working days as Good Friday before Easter and Good Monday after Easter. Note for Serbia: religious holidays are calculated according to the old Julian calendar.